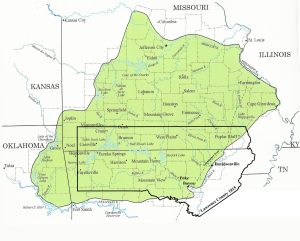 Once Steve Saunders of Imboden overlaid the 1815 footprint of Lawrence County over a regional map of the Ozarks uplands it became obvious that retrieving the settlement history of this vast region would be a major challenge.

Steve, Dr. Blake Perkins of Lynn, Robert A. Myers of St. Louis, Missouri, and Joan L. Gould of Fayetteville had independently researched this elusive and complex history for years. But now they are combining their efforts to create a website where the story of territorial Lawrence County will unfold chronologically. With support from descendants of founding families and regional organizations, the research team is retrieving a history that has often been buried deeply in shadows of the past.

Presented here is a downloadable PDF introduction for the project entitled Erasing Boundaries: The Forgotten History of Territorial Lawrence County in the Trans-Mississippi West 1815- 1836. The work does not unfold quickly but additional progress reports will be provided in future months.

In a downloadable PDF entitled De Mun and Company on “Blackwater”, Erasing Boundaries contributors offer new perspectives on the land claims and commercial activities of the De Mun, Janis, and Lemieux families who settled on Black River prior to the creation of Lawrence County.