The Lawrence County Historical Society will hold its quarterly meeting at the Powhatan Historic State Park on Sunday, July 10th at 2:30 p.m. 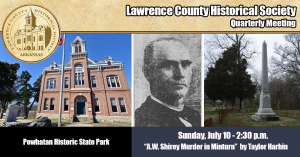 After a short business meeting, Taylor Harbin will give a presentation on the murder of A.W. Shirey of Minturn in 1910.

Taylor Harbin is the Archival Assistant at the Northeast Arkansas Regional Archives (NEARA) in Powhatan. He received his MA in Historic Preservation from Southeast Missouri State University in 2014 and moved to Arkansas in 2019. Before he transferred to the Archives he worked at Powhatan Historic State Park as a Museum Program Assistant, and first became acquainted with the Shirey murder while researching the old jail.

LCHS meetings are open to the public.