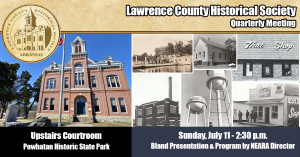 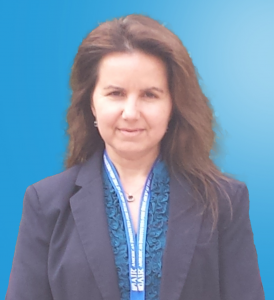 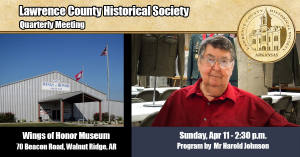 Our next quarterly meeting of the Lawrence County Historical Society will be on Sunday, April 11th at 2:30 pm at the Wings of Honor Museum, 70 Beacon Road, Walnut Ridge (across from the Walnut Ridge Regional Airport). Please put this on your calendar and spread the word that we are back in action.

After a short business meeting, Mr. Harold Johnson will be our guest presenter, who will speak about the history of the Walnut Ridge Army Airfield and an update on the museum.
While there, please take the opportunity to tour the museum to see what’s new.

At this time, we are still planning on wearing masks and will have tables spread out for social distancing.

The state will require that any indoor gathering of 10 persons or more get advance approval from the state health department. This will begin January 2 and go through at least March 1.

With this in mind, the  quarterly LCHS meeting that was scheduled for January 3rd is cancelled.

Our next scheduled meeting is April 4th, please pencil that on your calendar and I hope that we will be able to meet by then.