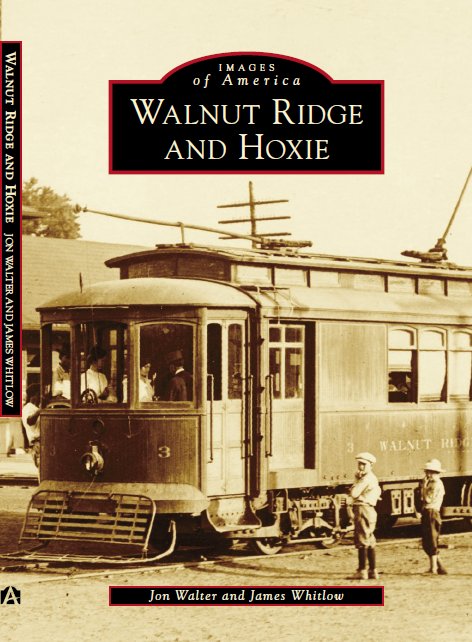 When word came to Old Walnut Ridge that the railroad was coming, Col. Willis Miles Ponder moved the entire settlement a few miles, cleared a site for a depot, and platted the new town in 1874. Not long after, Hoxie was formed when Henry and Mary Boas offered a right-of-way for another railroad through their land just south of Walnut Ridge.

Born by the railroads, the towns have been joined at the hip ever since. By 1889, there was a mule-drawn streetcar connecting the two towns, replaced by an electric streetcar in 1904. Hit hard by the Depression, the towns were saved in part when Walnut Ridge was selected as the home of a World War II Army Air Field, resulting in an influx of 4,000 people. This facility is now used as a city airport, industrial park, and home of Williams Baptist College. Images of America: Walnut Ridge and Hoxie illustrates the boom times and the struggles of these towns through their first 100 years.

A native of Hoxie, Jon Walter is a graduate of West Point. After retirement from the Army, he returned with his family to the homeland they love. James Whitlow, a retired electrical maintenance technician, is a longtime resident of Hoxie. Both sides of his family have been farmers in the area since the 1850s. The authors became friends through their mutual interest in collecting photographs and postcards. They have compiled unique images for this book from libraries, museums, and private owners.